My departure from Chos Malal commenced with a climb, providing a great view of the greenery that surrounded the town.  From hereon the day consisted of much climbing and descents through the sun-scorched scrub-land. 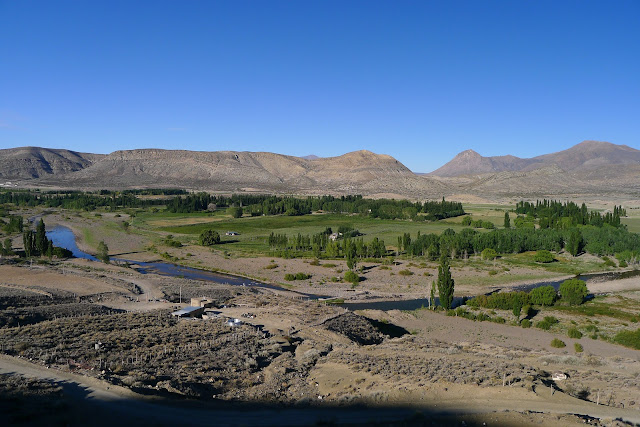 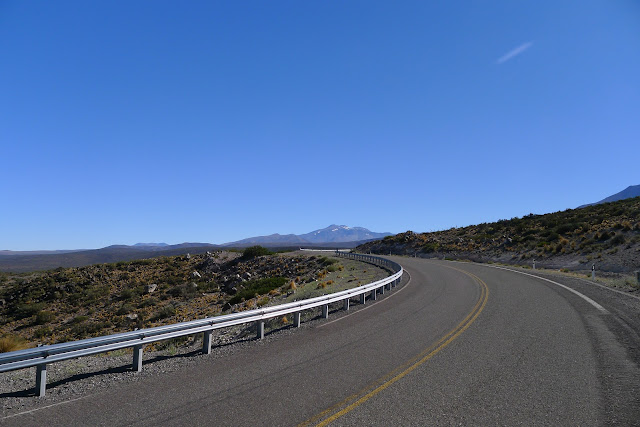 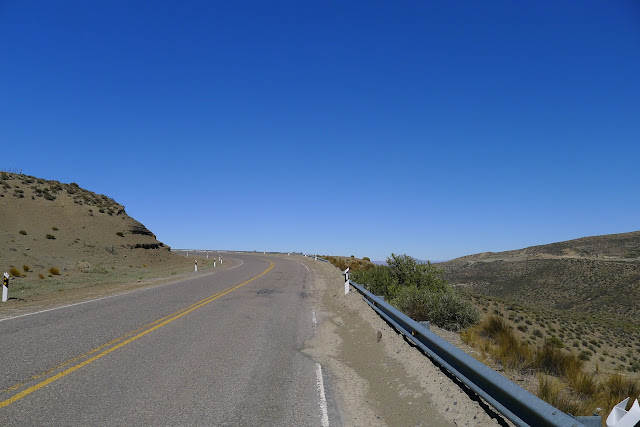 This sign resembled something I'd have seen on ol' U.S. Route 66! A 'Kiosco' is a kiosk 'shop' selling the basic supplies through a small hatch window, not speaking the lingo usually means lots of pointing and sign language as to what I want (learning words is not my strong point..'in one ear and out the other'...as an engineer I'm a numbers person!) 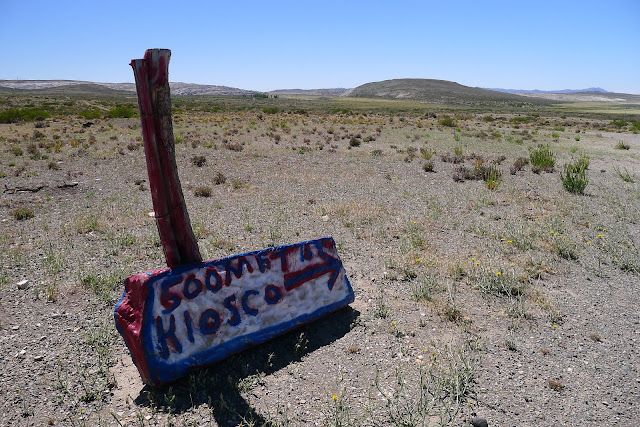 Around lunchtime I stumble across a deserted house with fortunately a clean-water hose pipe so have a cooling wipe-down from the morning sweat. My day's goal was rhe town of Barancas, a reasonable ride of 125 kilometres (77 miles) and with little else to stop for it eventually comes into sight. 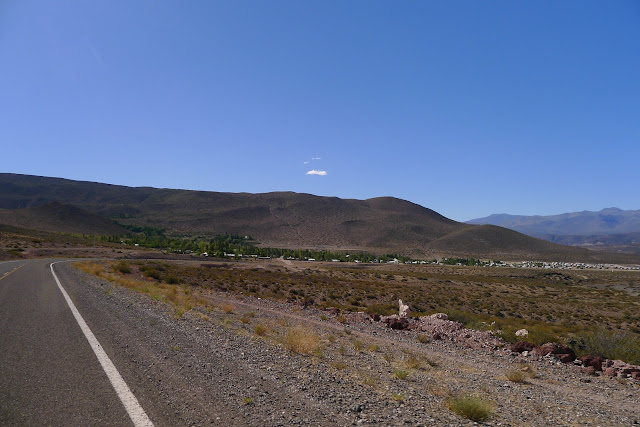 The town had a municipal campsite but unfortunately with no shower or toilet facilities gave little privacy to wash from the tap I'd spotted, albeit free to camp after befriending a couple whom lived in a house next to it I was offered use of their shower...followed by several large cups of good tea! In his younger days he was a keen cyclist, showing me some of his photos. 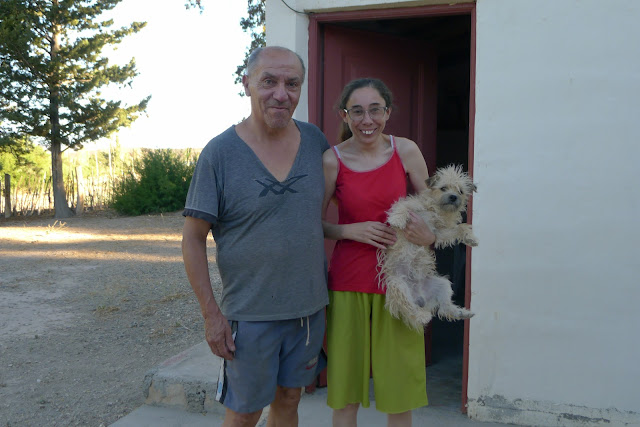 Making the most of the morning's start on some loooonnngg, fast, smooooth descents....only too aware that around one of the corners what was awaiting me.. 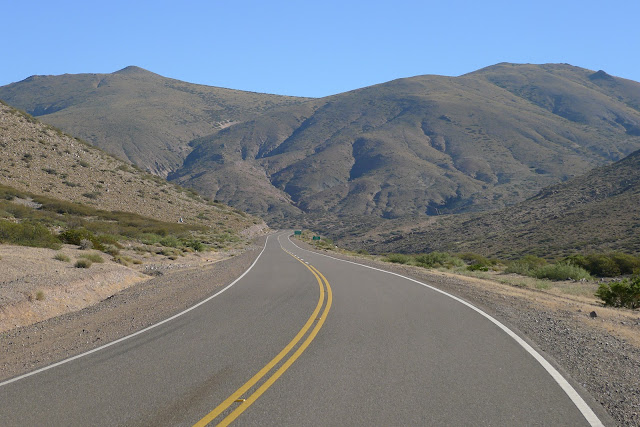 My map clearly showed an approaching section of unpaved Ruta 40, a shame as I'd been making some fast progress. I find it hard to comprehend how a fairly wealthy country's main road - running the length of the country - can have several sections that are still unpaved, simply sand, stones and rocks..imagine driving down the M1 and all of a sudden you've got 60 miles of dusty/bumpy rubble to drive over! How about a country-wide South American ban on siesta's and cracking on with the work-at-hand, and sleeping when the work's done?? Grrrhhhh..rant over. 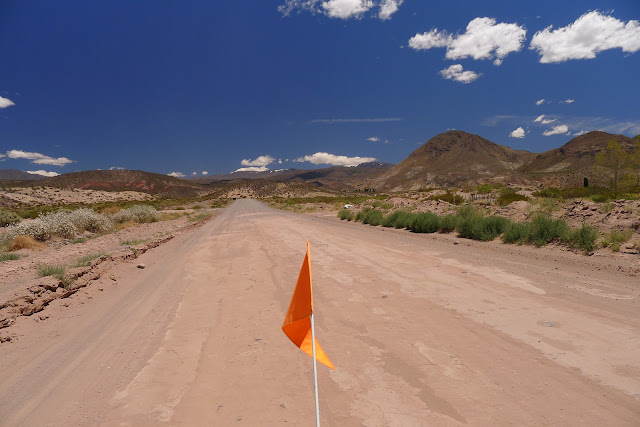 I new this rippio section would see me into the following day so without choice I reluctantly slowed down to a pace governed by the surface. The area itself was once actually one of the densest volcano areas in the world, fortunately no longer active...although maybe the road workers thought otherwise thus refusing to bring their tarmac!!  See the black volcanic rocks lining the river? 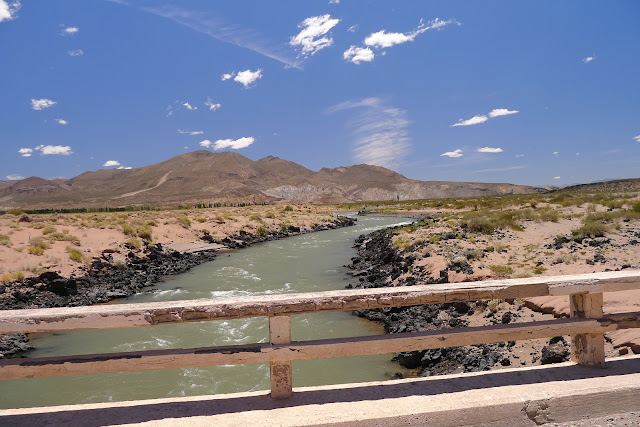 In the afternoon I notice a rubbing sound from rear wheel and on inspecting, one of the spokes had broken, the rim now revealing quite a buckle when the wheel was spun, it was strange that one broken spoke should cause such a severe buckle. Riding much further on this terrain without attention would not bode well so I gingerly press on, cursing and swearing over this main route comprising of sand, stones and bloody rocks!!! Fortunately a few kilometres around the corner I spot a building, close to the day's end it would make a great place to camp as was reasonably well set-back from the road and the main river was just behind it. 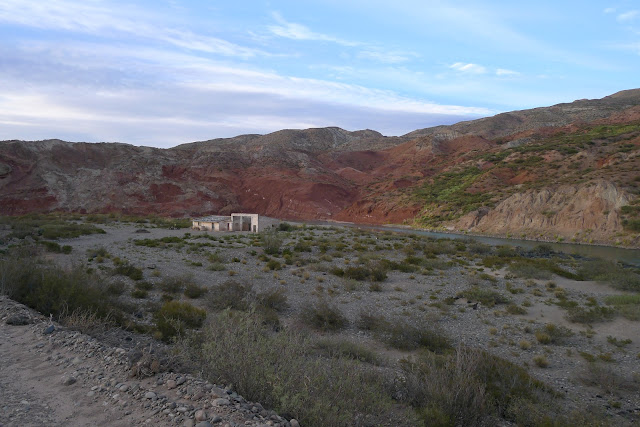 Claiming it as mine for the night my first job was obvious. The spoke had snapped off at the end within the rim's nipple thus needing to remove the wheel, tyre, tube and rim-tape prior to fitting a new spoke. Being quite a severe buckle even with little (none!) experience of wheel building knew that a new spoke would not simply pull it back into shape, this needed a good bike shop! There I was, almost stuck halfway along some rippio section of the country's main Ruta 40 with a wheel that resembled a Pringle! Riding any further on rippio with that wheel would last about as long as banana with a monkey, having attempted to thumb a lift that afternoon, a passing pickup had actually stopped but didn't want to help and drove of. The following morning I intended to stop every passing vehicle until I got a lift. 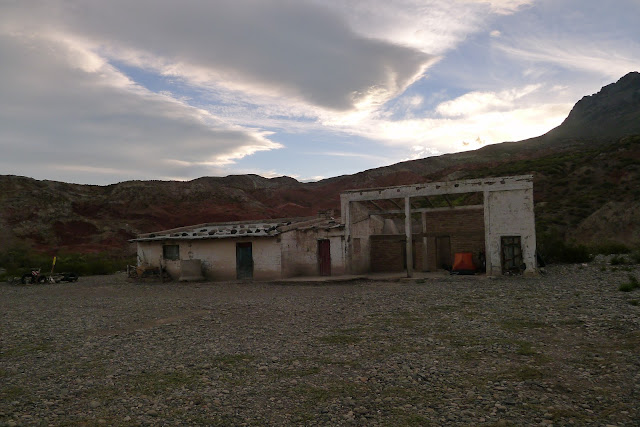 As the early bird catches the worm, likewise I was up bright and early to catch a lift, soon out on the road and at first sight of a suitable vehicle my thumbs in position with a helpless, friendly smile.
The vehicle comes to a stop and clearly understanding my problem (and the cause!) the family were only to keen to help and soon we have bike and bags in the back of the pick-up whilst I'm perched on the back seat next to mother and daughter with husband and friend are a-front. I sat there as-happy-as-Larry speeding over the rippio as though it were a sealed road, caring not for the plumes of dust spat from its wheels. We stop briefly at a small river canyon that had gouged its way through the rock...a Grand Canyon in the early stages?? 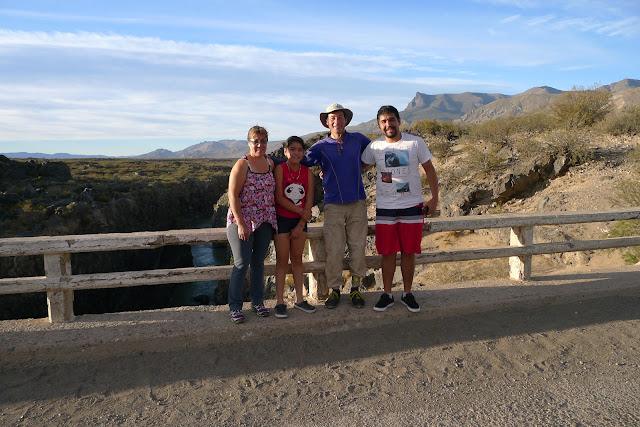 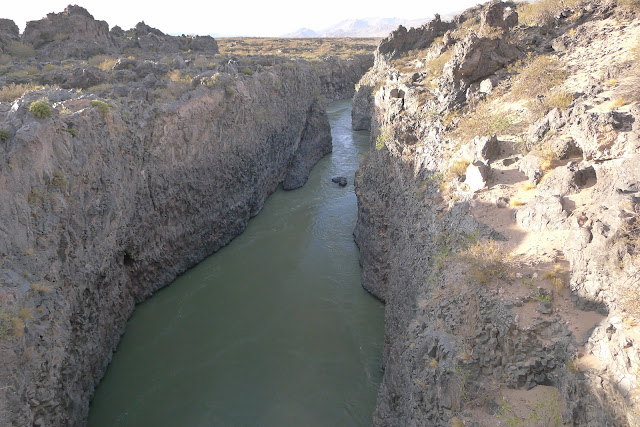 Although off-route from my northerly direction, San Rafael was the next big city I'd head to/through - not to visit some tourist attraction but to actually bypass [another] section of Ruta 40 that was still rippio!! This was where the family were actually heading, ~ 200 kilometres away.....no how far could I let this 4x4 roll before the 'purist cyclist' in me became overburden with guilt?
Uncounted kilometres later (30?, 40??) the road becomes sealed and I partly felt I should chirp up and ask to to dropped off, but instead contently remain silent as we zip along at 100 km/h. The next town -  Malargue - was about 40 kilometres away so decide that'll do nicely.
Buying a few food'y bits here I'm partly drawn to stay the night but with the day's riding kilometre-count less than ten I had to press on. Eight kilometres out I notice a touring cyclist heading my way. Simon was from England, Markyate - an hour from my town! He planned to stop the night in Malargue to prepare for the up-n-coming rippio section I'd came through, so with both of us connecting quite well and myself having much needed route information decide to back-track with him to the town and camp there. (Dop!! In the excitement of meeting a fellow countryman neither of us took photos!)

The route to San Rafael was along the straightest sections of road I'd seen on this trip, the road - and telegraph poles - tapering off into the distance with passing cars taking ages to fade away out of view along the heat-shimmering road. With just one small village between Malargue and San Rafael I was slightly concerned about water but manage to get some from an occasional house/farm dotted along the route. 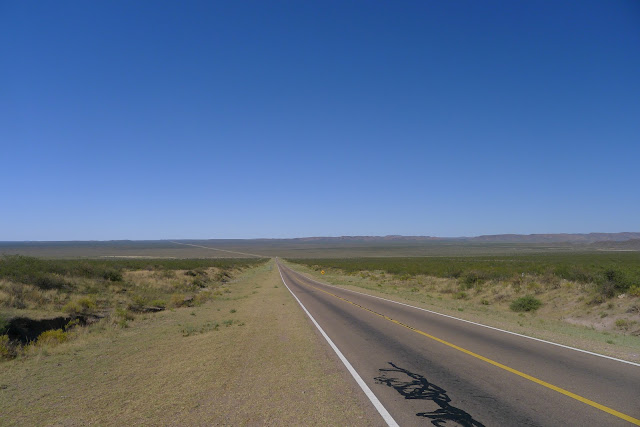 Almost stopping for the day at a small community I noticed set back from the road but was really too early, to be honest I was worrying about what lay ahead as far as water but manage to kick-start the adventurer in me and press on! Although something normally shows up at the end of the day, once the sun's dropped down there's less of a worry about lack of water, maybe a careless attitude but fear and worry can easily suppress an adventure. Asking at a farm that night I'm turned away - bloody miserable ol' git! - so instead camp on the opposite side of the road in front of some large, clearly unused gates. Although in full view of passing traffic I'm a believer that if passers-by realise that I know they can see me, that I'm obviously not in fear of them, as a result I've never been pestered when so openly camping, here, just a few friendly horns honk as they zip past. 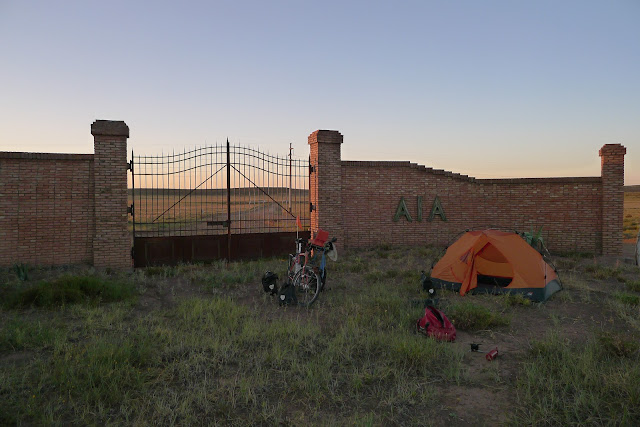 Safia - the French girl I mentioned in the previous blog-post whom had ridden from Alaska - had actually rode the section of Ruta 40 that I was now bypassing and said it was horrendously slow going, with little traffic and little in the way of villages, so with that in mind, and the fact my wheel needed a bike shop my little detour didn't seem so bad. 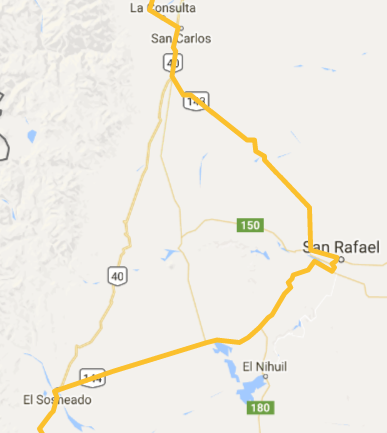 On arrival at San Rafael I soon find a back-packers hostel to stay at but find the bike shop [that Markyate Simon recommended] was closed for several weeks!, a shame as they looked quite professional, nevertheless I'm sure there'd be another.
Checking on the Warmshowers.org cyclists hospitality website I notice the town actually had several members so send them all a message -  more-so for advise on a good bike shop but also if anyone may host me for a night. Later, in the evening walking around the central plaza I see a couple of other touring cyclists and start talking to them. One was Brazilian and one Argentinian and by coincidence were staying with one of the Warmshower member's I'd messaged.
Later, back at the hostel I receive reception phone call, it was a lady who was hosting the two other cyclists and invited me to stay at her house the following night! The following morning I make my way across the town to her house. It was great to meet Valeria along with the other cyclists (names!!??) and she was glad to take me to a bike shop where without much of a wait my wheel was made tru once again (Valeria can be soon on the Hosts page).

Out of San Rafael I was well-chuffed that my wheel was back in shape - a problem like that away from home in one's own country is hassle enough, resolving the problem / getting back home etc., let alone halfway around the world, in a country where the language itself is a barrier. Being quite organised I find it difficult handling unforeseen / unaccountable change of plans, some say "the best plan is no plan" but that's a tad too hippy-like for my regimental approach, maybe I should use the "keep one's plans flexible and expect the unexpected" approach?

Another one of the many road-side shrines I'd become accustomed to seeing, almost daily! 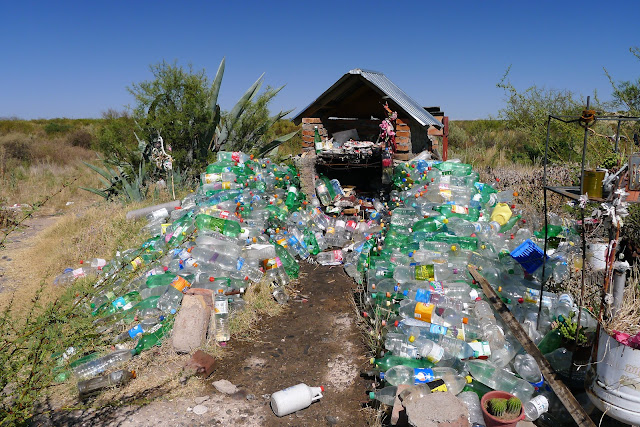 The region of Mendoza is known for its olive oil and wine production, being one of the world's nine wine capitals.  As such Valeria recommended as I get close to the region's capital (of same name) to take the scenic route through some of the vine yard villages, this would also by-pass the busier Ruta 40 sections around the city.
Here, the towering spine of the Andes Mountain range became most impressive! 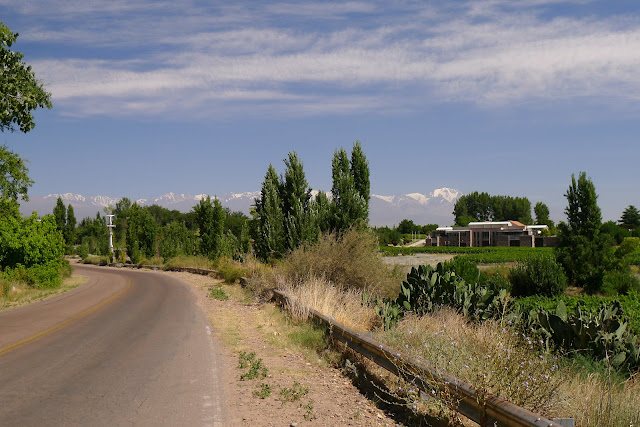 With grand boundary-features like this it was clear to see it was a relatively wealthy area. 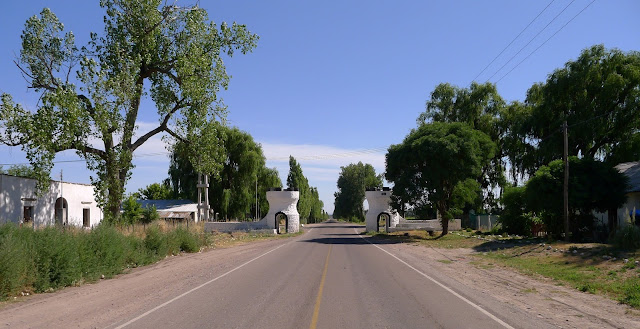 Vine yards with a view! 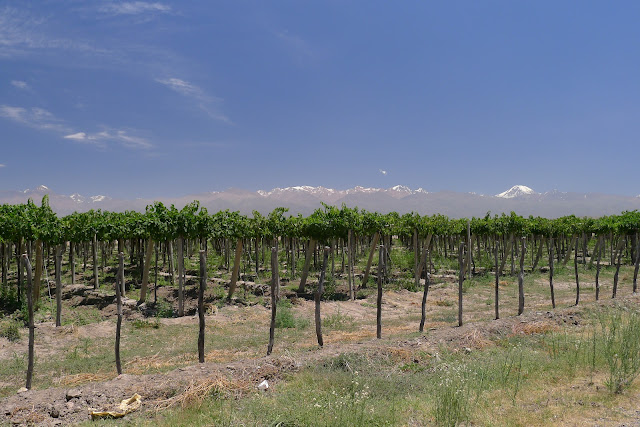 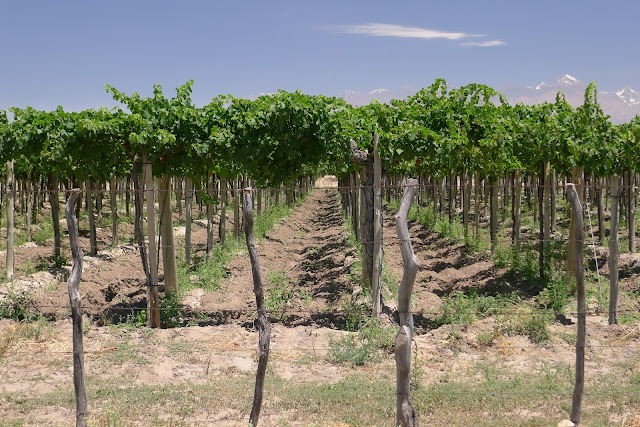 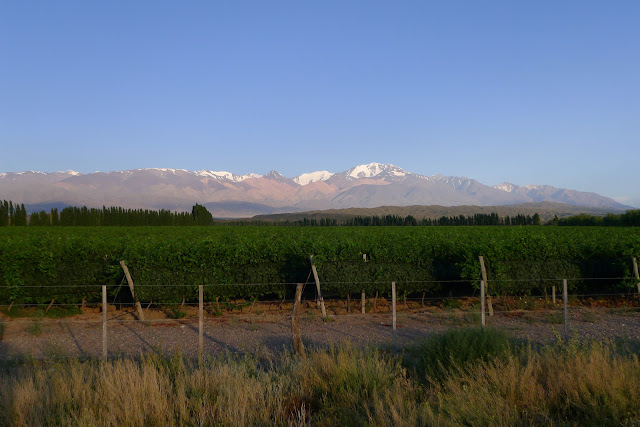 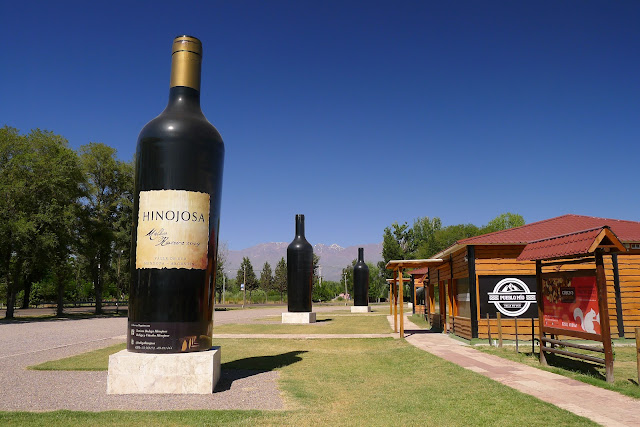 Being January - peak summer holidays - and a popular city with back-packers, finding a hostel with a free bed was not so easy but manage in the end. Nicky and Jules had also arrived the same time, coming over the Andes from Santiago (the same route I'd be riding but obviously in the opposite direction).
Meeting in the central Plaza we had a good chat about what we've been through since our last rendezvous wey back on the Carretera Austral.
Mendoza city is renowned for many of it's fine restaurants, with excellent quality (Argentine) beef being popular and as Jules worked in the hospitality / food industry he was only to keen to sample the offerings, at the restaurant maybe the food was just too tasty as neither of us took any photos of ourselves but just the food...and vino! 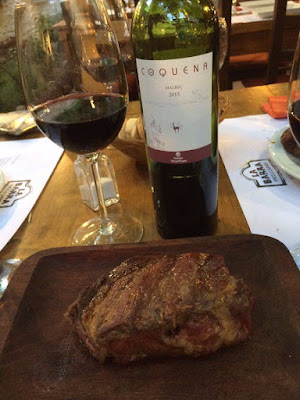