Now over the Andes, Santiago was - via a day's southerly ride - in sight. My dilemma was; Do I ride [south] into the chaotic, traffic riddled  huge city, find a hostel, find a bike, get the wheel fixed, or, press on north and keep positive that a bike shop in one of the towns I'd ride through would have a good bike mechanic? After all, just because Santiago is the capital doesn't mean the bike mechanics would be any better than a small town...the latter option winning the vote.
The first night I camp at swimming pool, having been unable to find the village's advertised campsite some locals had directed me there, welcomed in I was shown a nice grassy, shaded patch where to pitch. 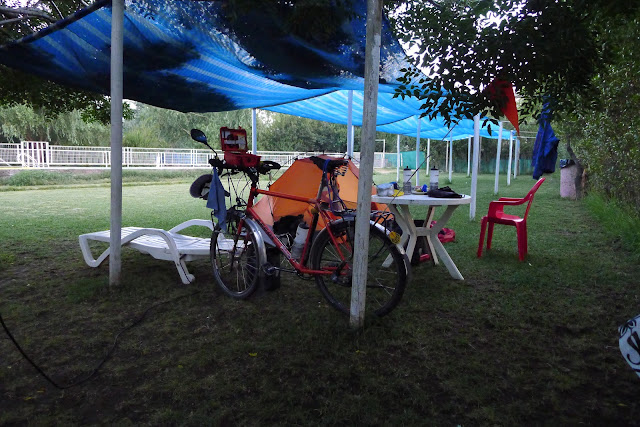 This area has a big fruit farming industry and as such all the village grocers were jam-packed with many of the farms produce - sold at great prices, here's a view of one of the farm plantations. 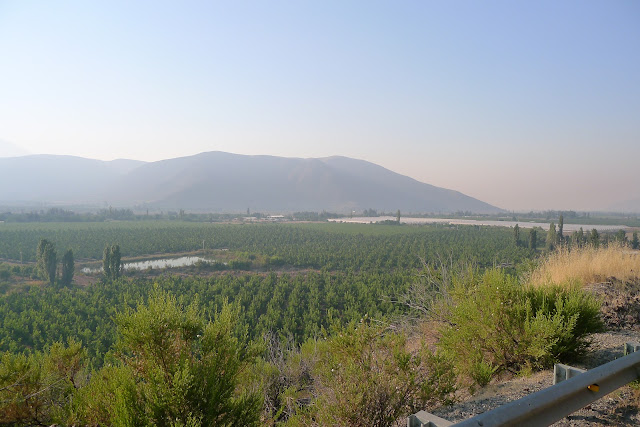 Riding up into / through a low mountain area on a quiet road, TWANG! Another spoke pops. Now I'm in real a quandary! Do I gingerly back-track and visit the crazy capital, or press on and if I'm unable to find a bike mechanic take a coach to the capital?..that would certainly prove easier than cycling there, the mere thought of (a) back-tracking and (b) riding into Santiago kept me going forward. The big town of La Ligua was about forty kilometres away, slowly but surely arriving at and lo-and-behold one of the first shops I see... 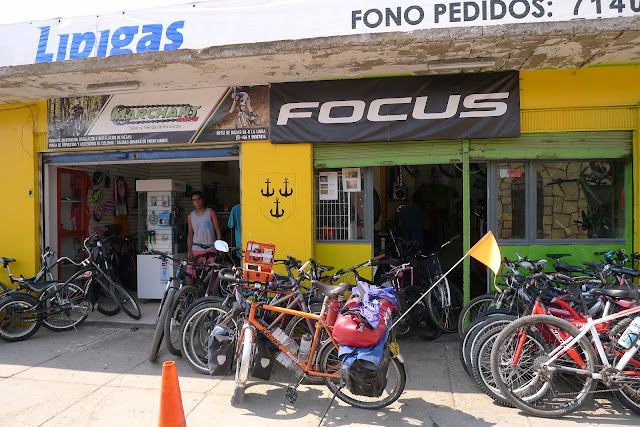 At first one of the young mechanics (blue t-shirt) tries to thread a new spoke into the rim's nipple but I explain (as best sign language enables) that the old spoke's thread is still in the nipple. Removing the wheel he then tries to pry the (deflated) tyre off using a screwdriver! "NO!" I screech, reaching for my tyre-levers. Finally the main mechanic comes over (red t-shirt) and I further explain that due to the severity of the buckle that all the spokes need loosening first, clearly understanding that I was correct he gets to work. A turn here, a turn there, slowly but surely the rim starts to take shape. Half an hour later and it's looking great! With tyre and tube back on and the wheel in place, pumped up it was great to have back in shape, and costed less than £10! 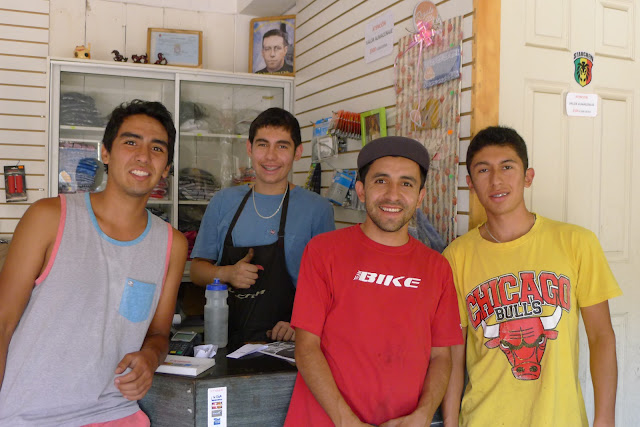 Booking in at a hotel that night I prepare myself for what lay ahead on Ruta 5 a.ka. The Pan American Highway. At 3,364 kilometres in length is Chile's longest road, from the Peruvian border following much of the country's coastal route, through Santiago and finishing at Puerto Montt (where the Carretera Austral also starts/finishes).
The section I'd ride, goes through the Atacama Desert - the driest non polar desert in the world. As I tend to make up the route as I go along, I was unsure as to how much of the Pan-Am I'd ride but was - as on Argentina's Ruta 40 - looking forward to some long distance days on clearly visible northerly progress. Although it's good to zig-zag now and then - with such a long south-to-north route up the Americas - I also like to see that my direction is maintained, else I'd feel lack of progress and that I'm getting no where.
The following morning I head out for the ten kilometre ride to where I join the Pan-Am Highway. 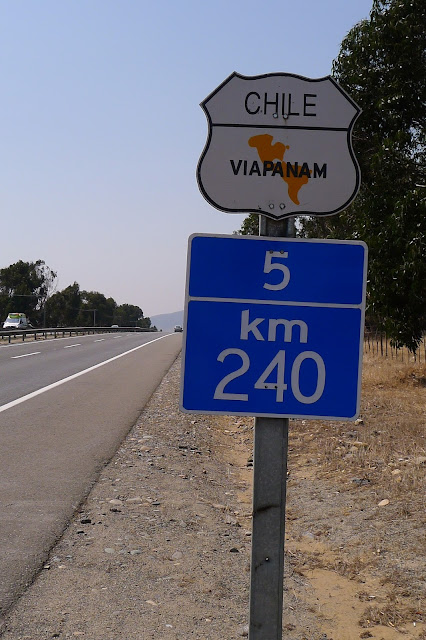 As seen, it's a cyclists haven! A great condition surface along with an impressively clean hard shoulder meant not needing to keep an eye on approaching vehicles. 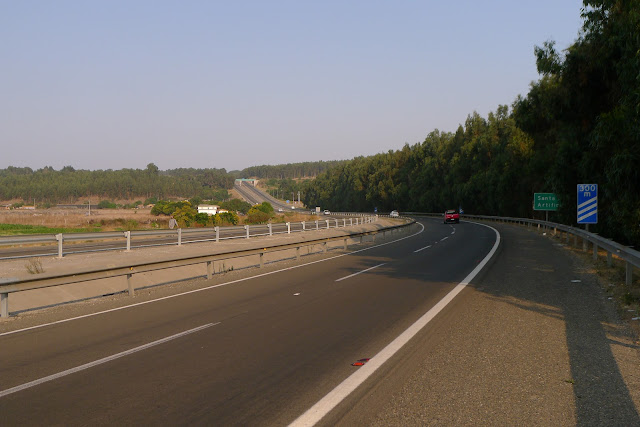 Being effectively the foothills of the Andes, the road swept up long climbs and back down t'other side and my day's climbing showed surprisingly at 1200 metres! 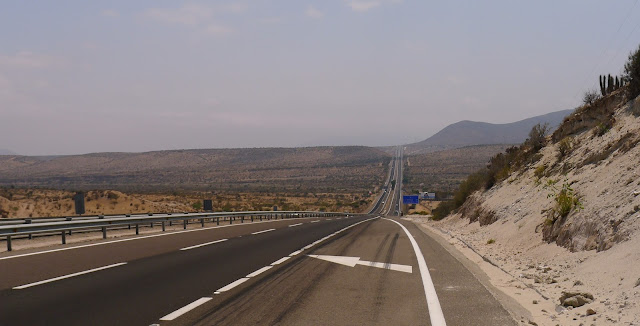 After 126 kilometres my first night's camp-spot was a small, neglected play area next to a Shell station, perfect as obviously there's toilets and water, although it was rather noisy at night from passing trucks. 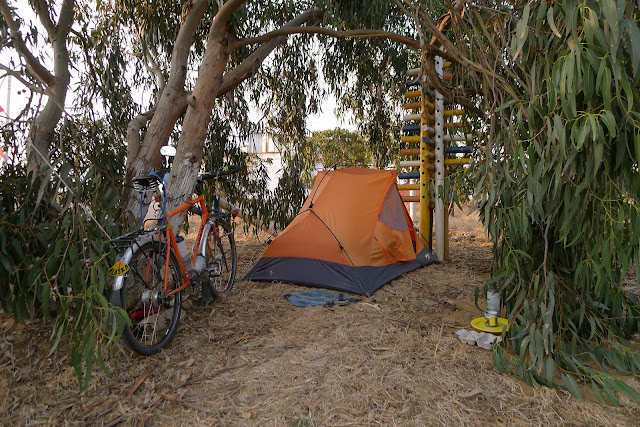 Although still in the mid thirties the coastal route was a welcomed change from that of the Ruta 40, mainly due to the cool sea-breeze blowing in, and also just a change of scenery...I'm sure that opinion would change though after a thousand kilometres of it! Passing through a large wind farm area I was lucky enough to have a tail wind!! 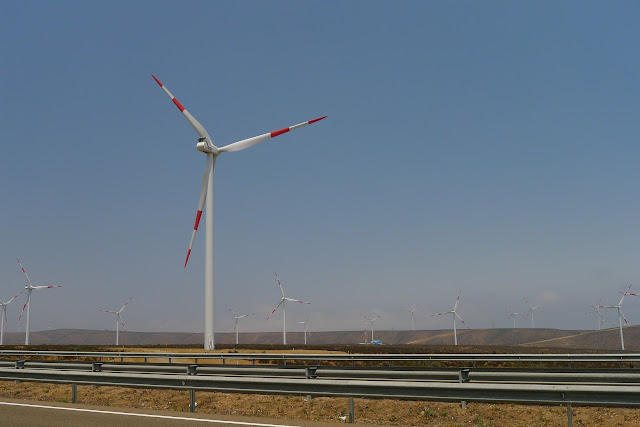 On the second day I stop at the village of Alcones, although only ridden 103 kilometres there was a small park set well back away from the road that would be an improvement from the previous night, along with a medical centre who gladly let me use their toilet and tap. 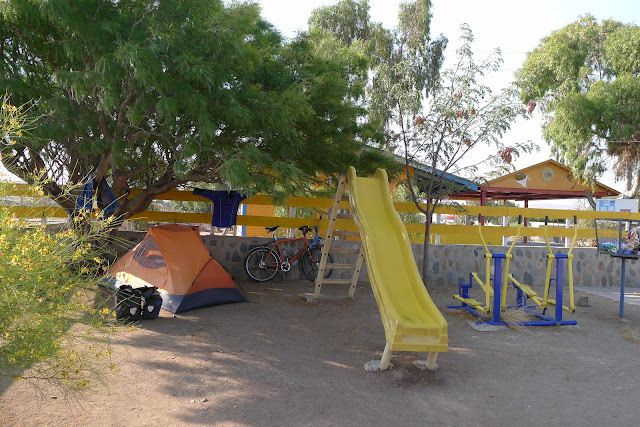 With this road not passing through villages and towns my interaction with people was somewhat limited but I was nevertheless enjoying each days pace.  Earlier I'd acknowledged a couple of road cyclists who'd gone past, later whilst having my bus-stop lunch break they were heading back on their return loop, stopping for a brief chat one of them throws me syrup-like energy bar (liquid sugar!).
Later that day I arrive at the big city of La Serena, knowing that finding a campsite here would not be easy I'm almost drawn to a motel / hotel but had been enjoying my previous nights rather random places I'd camped at. Carrying on to the edge of the city I ask at a house with ample surrounding land but was turned away, back-tracking to a river I'd seen I manage to find a space - not exactly out of view - but appeared okay, and would fit in nicely as a 'different' place on my 'random places to camp' list..how many consecutive nights would that reach? 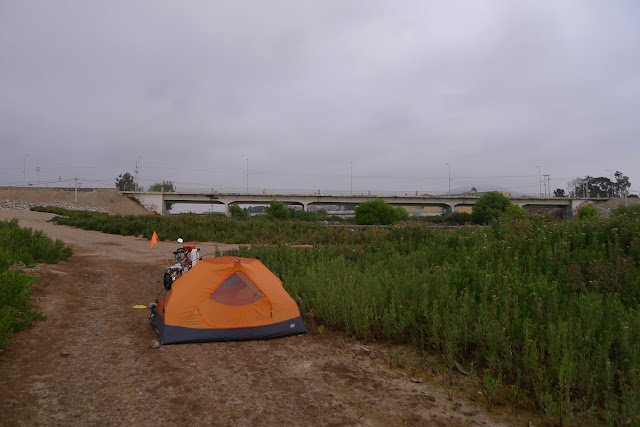 The next day the route started to climb over a small mountain, as it climbed, the warm humid sea air condensed into a veil of misty clouds, thickening the higher I went. 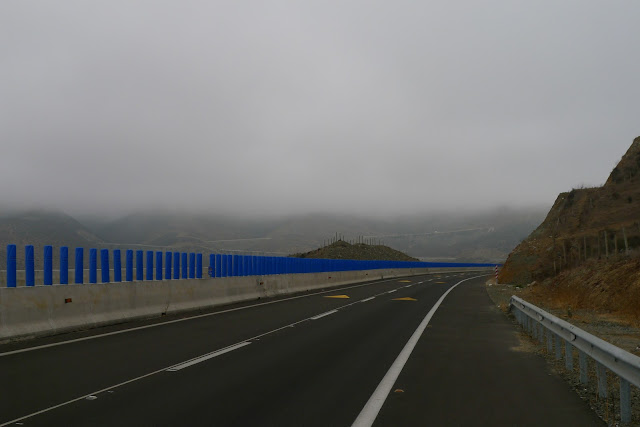 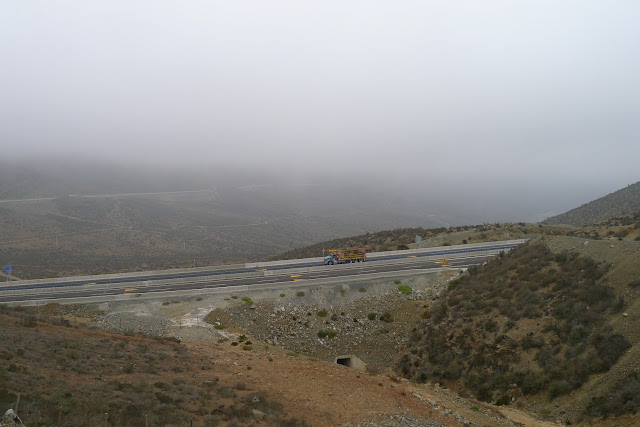 Awaiting on the opposite side of the mountain was welcomed clear skies, and (bonus) yet another tail wind, zipping me along nicely at 35 km/h. That evening I arrive at the mountain village of Vallenar, this really felt like one of the Moroccan Atlas Mountain villages. So what random place would I find myself pitched at this evening??..now that's a new one, a church! Soon locating a tap at a neighbouring community centre I'm set for the night (see my tent in the corner?). 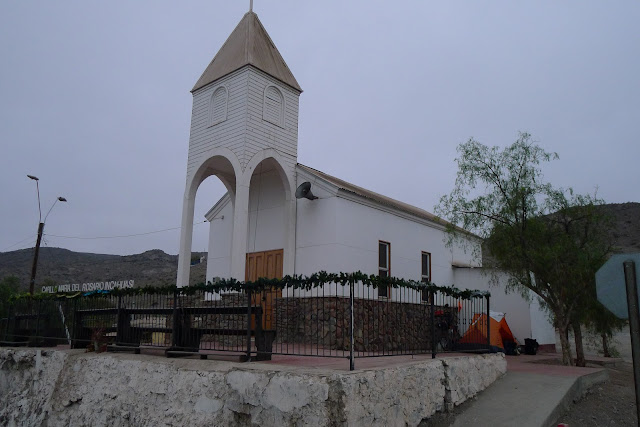 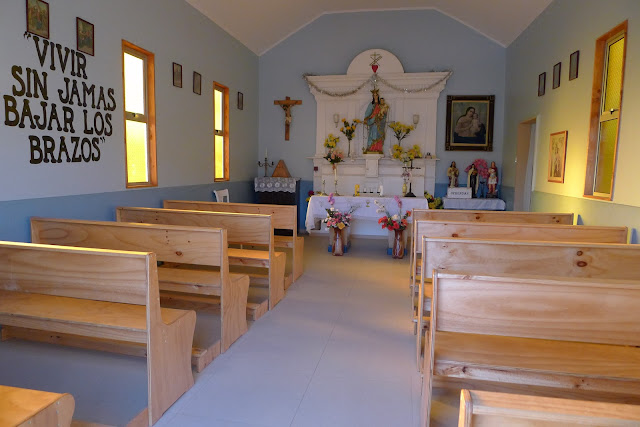 Most of the Ruta 5 is now dual carriageway but here preparations were still being made to bypass the town with the new dual section. This reminded me of U.S. Route 66 'progress' whereby the newer road that bypassed the towns and villages had severed their income, fuelling their decline. The village certainly held no trophy for the Centre of Excitement but I wondered what the future would hold. 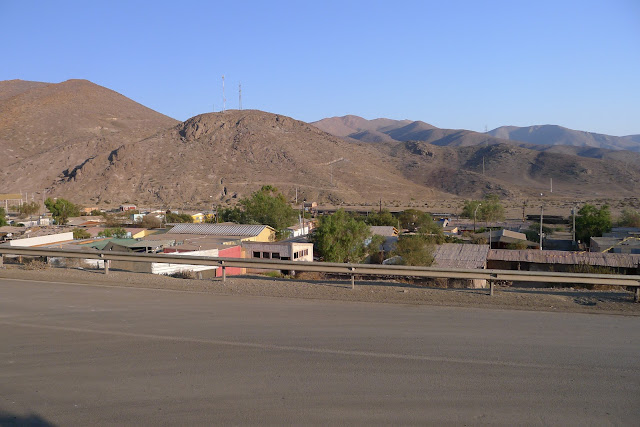 A misty haze starts the new day but once the sun's above the mountain peaks it clears, revealing some great views as again, the road climbs up. 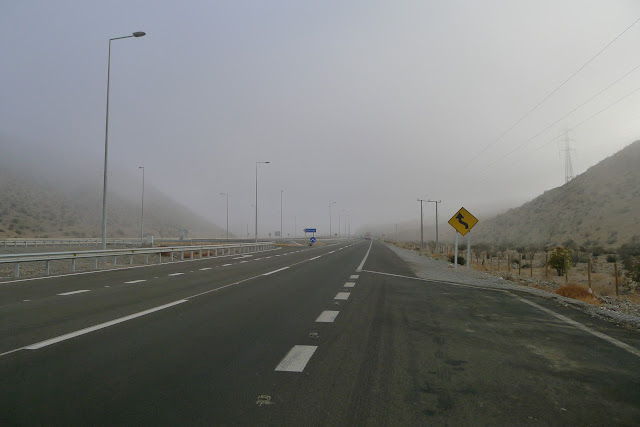 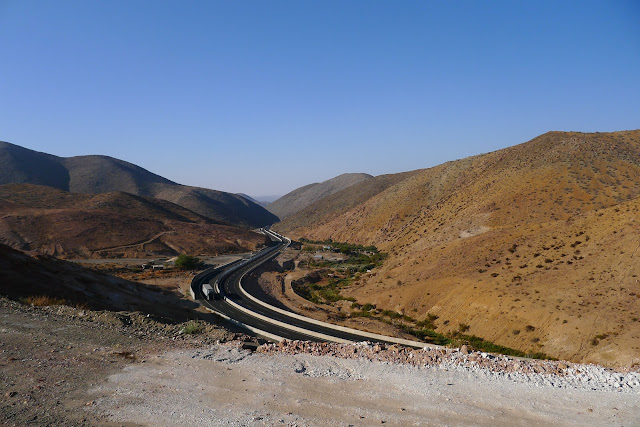 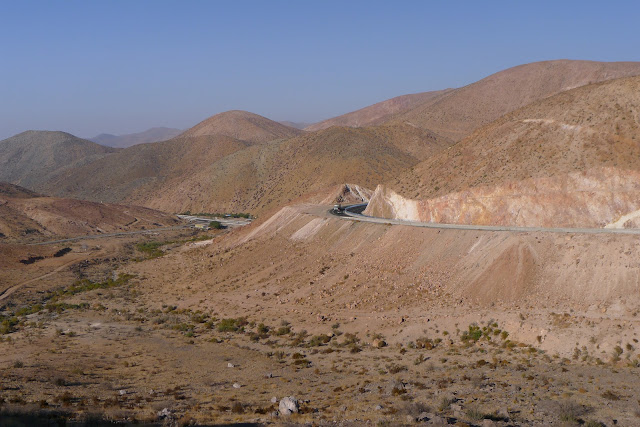 This was proving to be a great road. Sufficient towns and villages to buy supplies but not too many hinder progress, little traffic, great views and a smooth road. 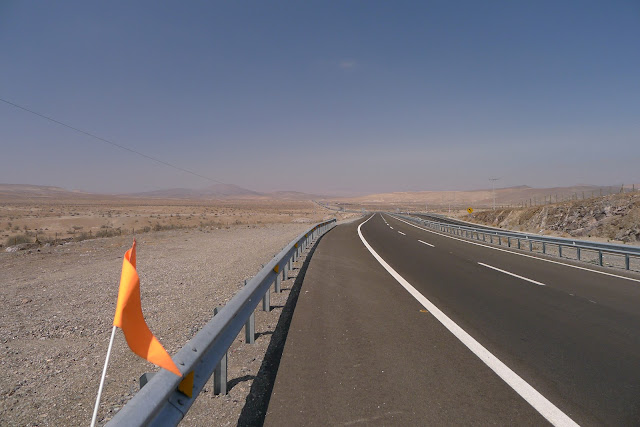 Having rode past several huge solar-power farms in the Atacama region I read that due to Northern Chile's solar incidence it has the potential of producing all of its electricity via solar. In June 2014 a 1oo megawatt power plant near Copiapo was opened, capable of producing 270 gigawatts (270 million, one thousand times over!!). I was pushed not to see any pylon construction in progress, they were everywhere.

This day my goal was Vallenar, quite a big town set away from Ruta 5 several kilometres. Reaching such a town felt like an oasis [quite literally] in the dessert. The town had a narrow, but very fast flowing river along its length with a cycle lane parallelling it with watering points and pic-nic areas and a basketball court at the end. After what I'd been riding through, the greenery and ample flowing water looked quite surreal.
In town, stocking up on food supplies and cash at the ATM I head back to the river route and manage to find an ideal camp spot, slightly shielded from view I'm good for the night. 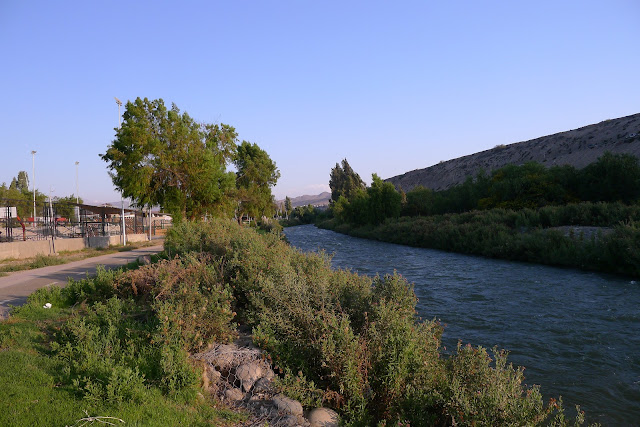 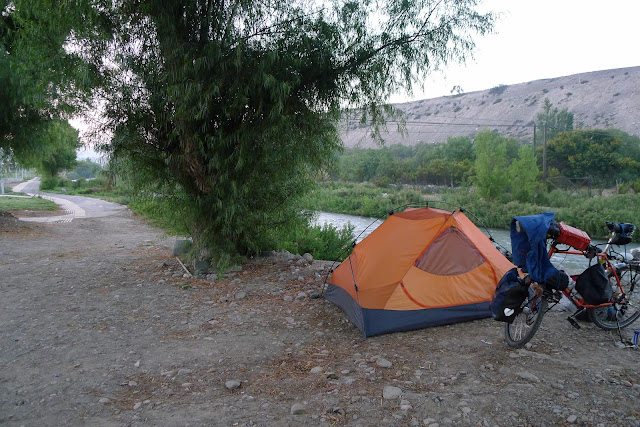 One disadvantage of free-camping is the limited options / privacy one gets to wash. I'd read on somebody else's blog about the Pan-American highway truck-stops and this morning stumbled across my first. Merely stopping for some water, a lady outside selling bootlegged DVD's hilighted the shower facilities...did i stink that bad?! Albeit a cold shower it was just the ticket in the heat of the day, just perfect. After, while eating lunch, some men brought me some pieces of melon, what a great little stop! 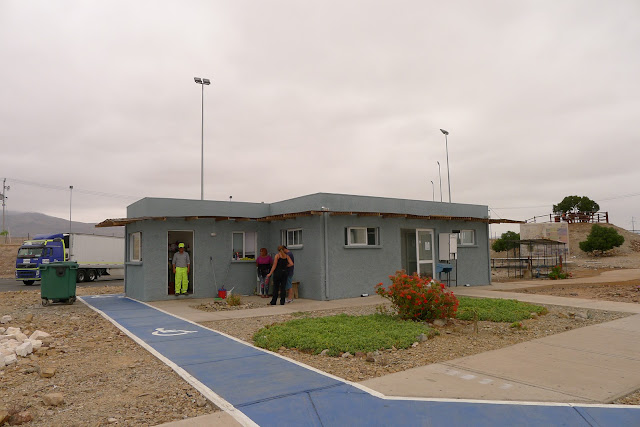 "Native Fauna in danger of extinction" Being so dry I'd wondered just how the sporadic spread of shrub-like plants actually gets watered..my intrigue would soon be answered... 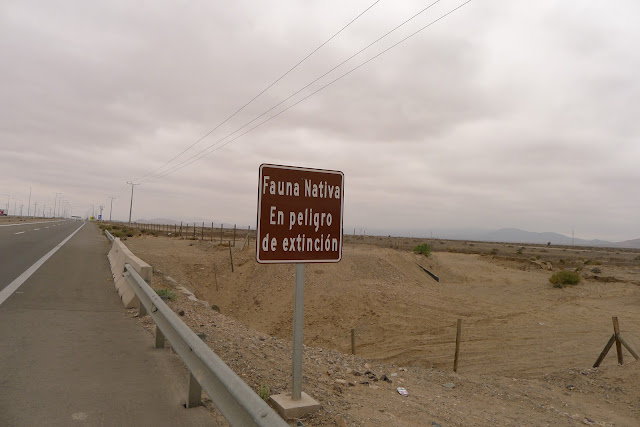 Every so often I'd see one of these, a truckers road-side cafe, around lunch time the better ones would have many trucks pulled up around them.

The road tapering off into the horizon, along with the several lines of electricity pylons either side, yet to have the miles of cables installed. Copiapo was the next big town, too far for the day so fingers-crossed I'd manage to find a suitable area to pitch. 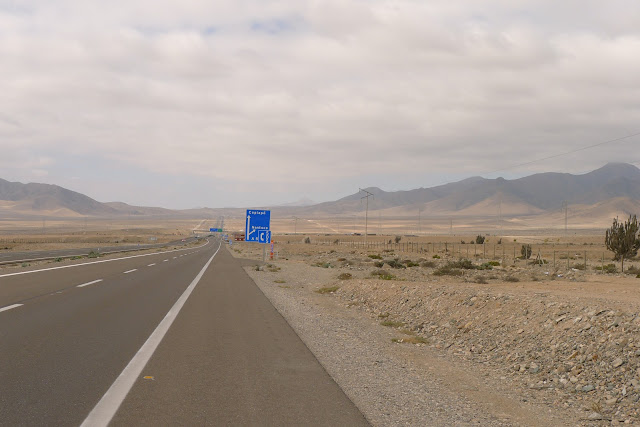 Up ahead my map showed a turning and as I got closer I could see some buildings / sheds at the junction, looking suitable to camp but without any water I then noticed a kilometre or so further along Ruta 5 [what I hoped] to be a truckers stop. Riding down to it my luck was in! With a large mound at the entrance for visitors to walk up that overlooked the parking bay made a great place to pitch, a food vendor selling fast-food and the toilet / shower block. Another new entry on my 'random places to camp' list! 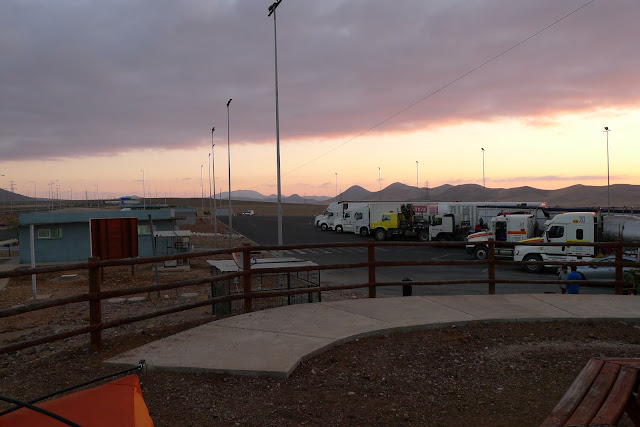 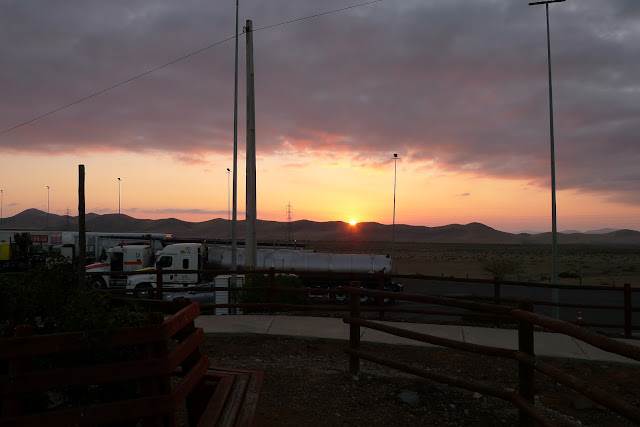 Although one of the driest areas in the world, this is how the native fauna gets watered, by the early morning dew that condenses on everything....tents and bicycles included! A real surprise, something that I never expected, from the previous day's scorching heat, to this damp, cool start. 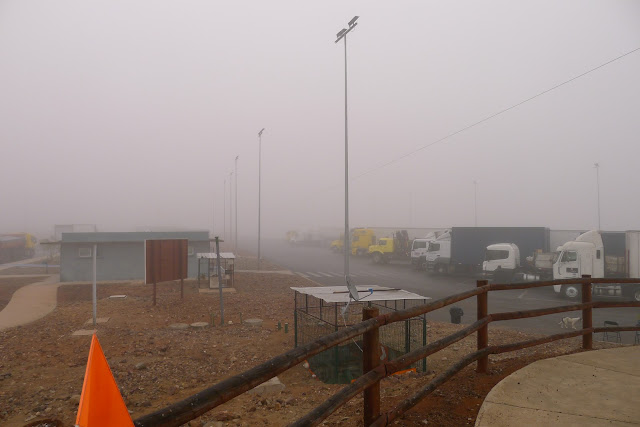 The morning's sun soon clears the misty air away and it's soon up to gas-mark 8. With only a only thirty kilometre ride to Copiapo the last six being a fast descent I was soon there. 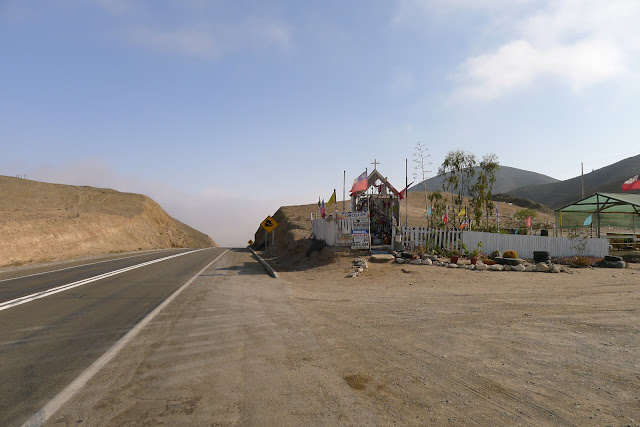 With the town stemming from the mining industry it's hardly a back-packers resort so new there'd be no hostel and just find a cheep-n-cheerful hotel near the centre. Later I check online and find there's a WarmShowers member in town so send a message and soon receive a reply from Felipe - welcoming me to his flat the next day. Another one of those times that a smartphone would be a benefit as could have messaged a few days prior.
Meeting him early the next day he leaves for work, working as a lawyer for a company - literally next door. Unfortunately his wife and daughter were away visiting their parents but fortunately Felipe loves to cook and makes a great homemade pizza, washed down with a beer or two... 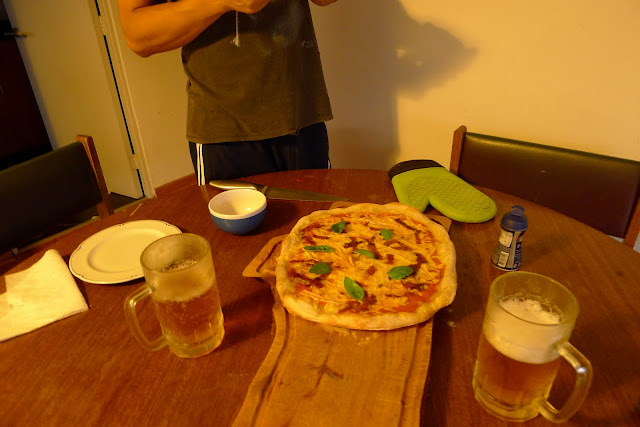 With just over 700 kilometres of the Pan-Am under my wheels the next section
takes me into the heart of the Atacama Desert, all  in the next posting!
- - -
Newer Post Older Post Home