Departing Salta on my bike was certainly preferred to my arrival. As Phil would be heading to Buenos Aires, from heron on it was back to me, myself and I.
A brief climb out of the city eventually led to a forty kilometre east-bound hard-shouldered dual carriageway that continually descended lower and lower. Salta itself is effectively perched in the foothills of the Andes at 1200 metres and enjoys reasonable weather - although the previous few afternoons had been some really heavy downpours, fingers crossed as I headed lower I'd further myself from any showers. By 11am I'd clocked-up forty five kilometres with little effort, feeling doubly happy that my new rear wheel was running okay.
With the route now heading southwards the road became busier with roaring traffic heading to and from Jujuy and without a hard-shoulder at times feeling quite a dangerous road although at times I was blessed with a traffic-free slot. 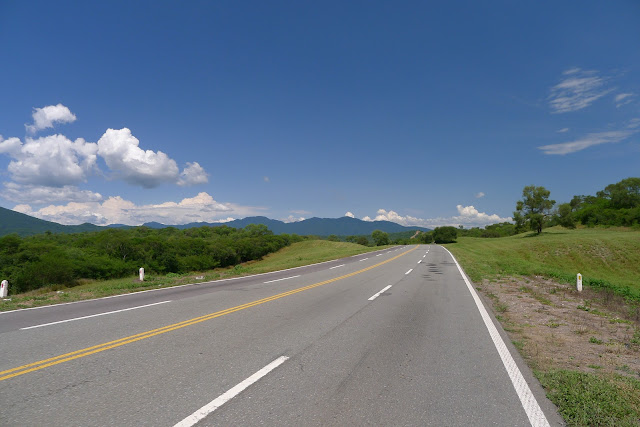 Set back from the main road, reaching the planned village of Lombreras I was glad to be away from the traffic noise, the clear sky and greenery had been great but I couldn't wait for the following morning's left-hand turn, just thirty kilometres further down the busy road. Looking for a place to camp I firstly tried the nearby river but it was rather busy with locals so heading back to the village was given a place near the police station, down a building's siding on a concrete drive, behind an old car - not quite what  I had in mind! 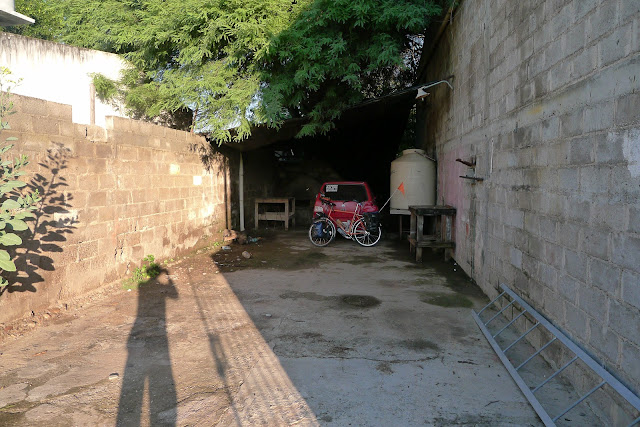 The following day I finally reach my turning onto Ruta-16, a road I'd follow for just over seven hundred kilometres. Looking at google maps - albeit for the 'blip' at the beginning - I could see it was straight and with little in the way of touristic sights felt positive I could ride some big-distance days. Much of the road is through the Chaco province, a low lying area comprising huge national parks many hardwood forests.

Looking back down the first few kilometres..no traffic!! A handful of touring motorbikes zipped past and that was about it, munching away on a packet of biscuits I blissfully plodded along! Now being around 250 metres altitude the Sun's morning heat soon ramped up and by 11 would be around 30'c...surreal to think I'd recently been in a mountain-pass snow storm!

Calling in at El Galpon, the first village, I buy a few supplies from the local store, sitting down in the shade with the proprietors for a drink and snack....unsure of how far to the next town, and due to the heat I actually contemplate staying..but no!, those long-distance days wouldn't come about like that. 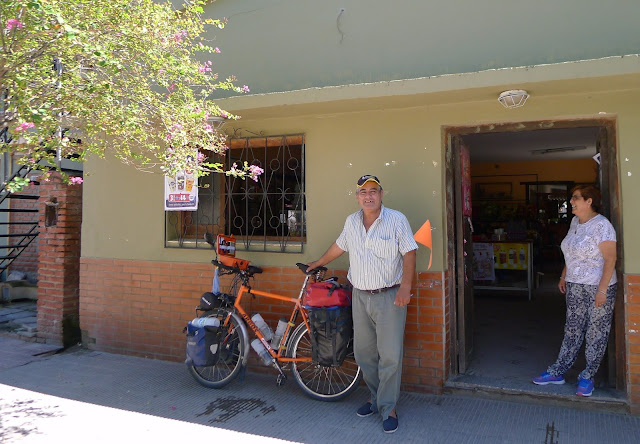 This road was bliss! A good surface, flat, next to no traffic, the abundance of greenery and a blue sky. In the afternoon I stop under the shade of a tree and by evening at 85 kilometres I reach El Tunel, baking in the heat a bottle of cola and some shade felt great, with a river running close by I decide that's enough and inform the shop's proprietors I'd camp on the bank. With a new bridge under construction I had to wait for the workers to leave before setting up camp. 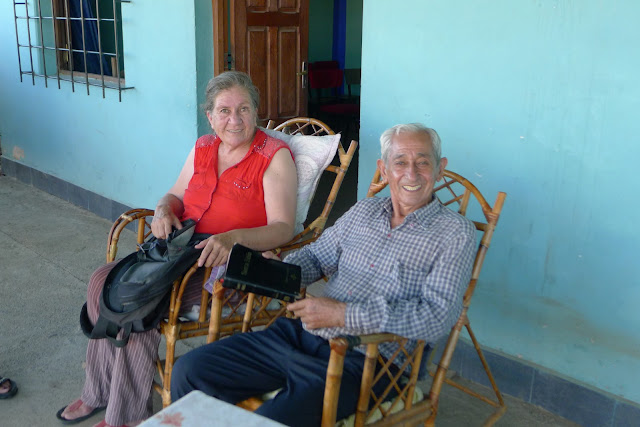 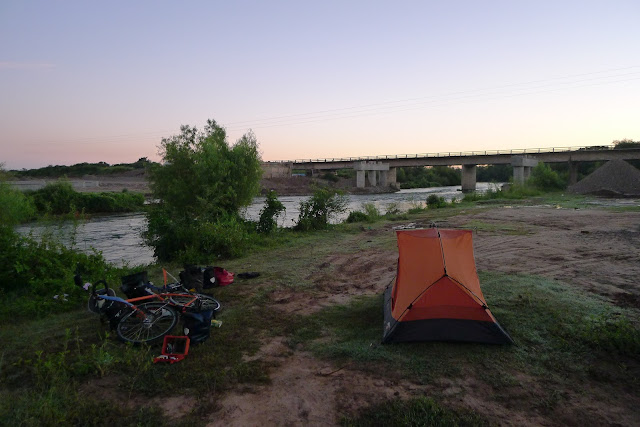 In the morning the bike and tent were covered in mildew, but not to worry as it would soon evaporate in the crazy heat. Quack quack quack. 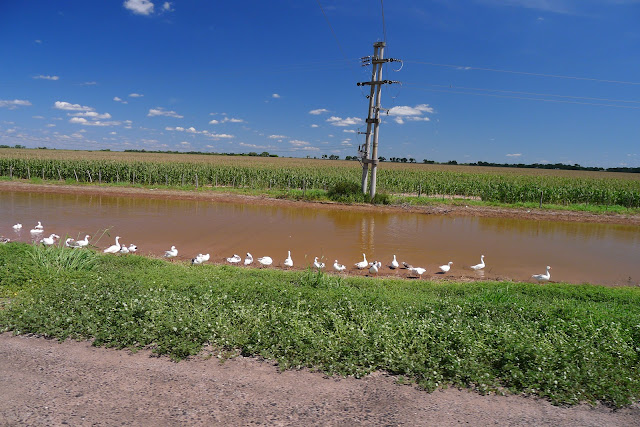 Apart from the straight road and camp-spots there was little-else to photograph, the third night I camp on a village police station lawn; 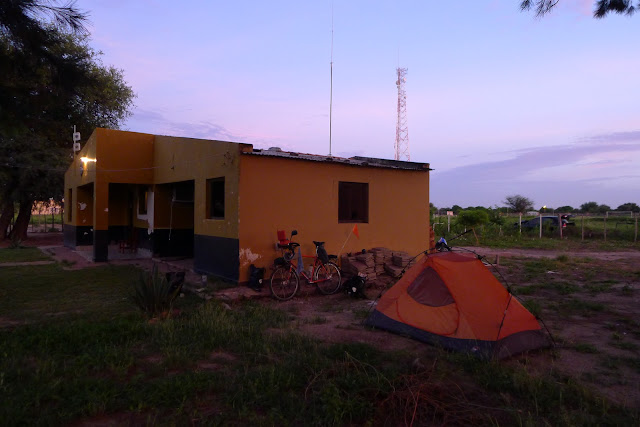 The road was all mine. 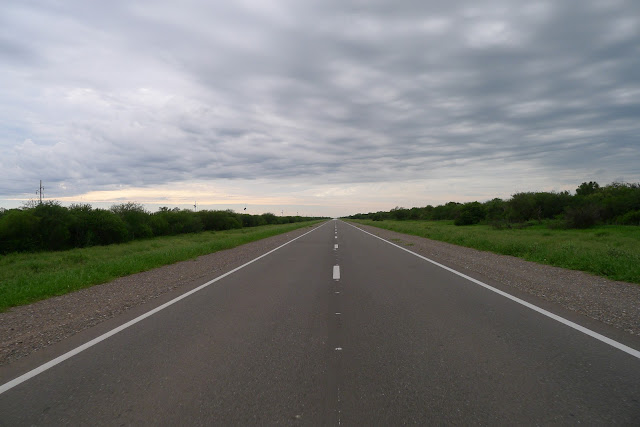 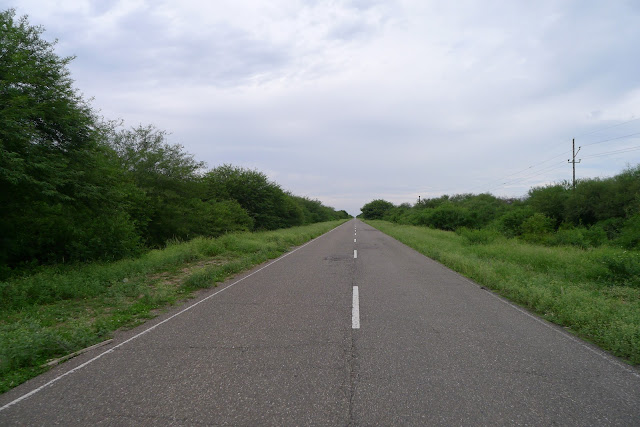 On the following night I'm refused camping rights(!) at the police station but soon find an old building to serve my needs. (Can you see my tent?)

In the morning before pulling onto the road always look left.. 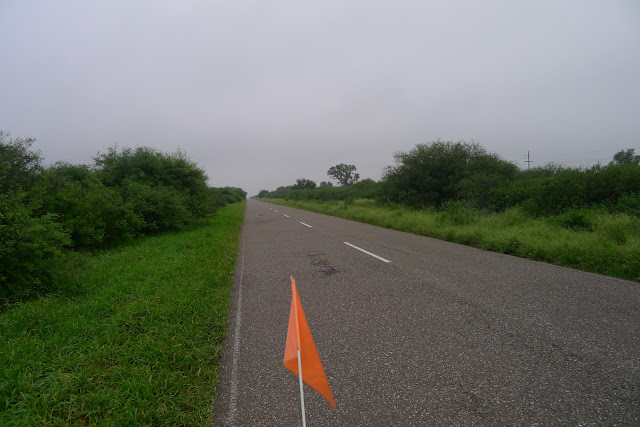 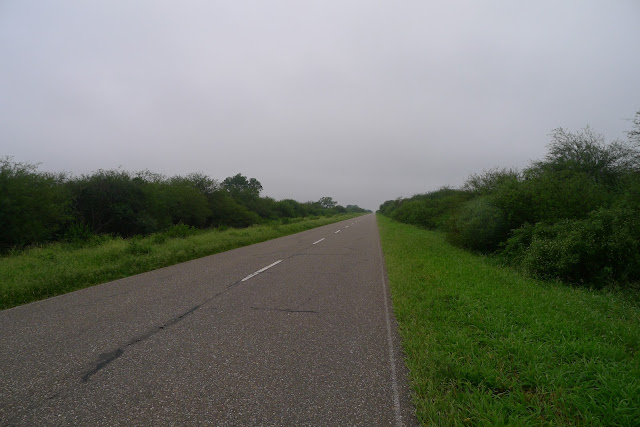 And likewise after ones lunch-break.. 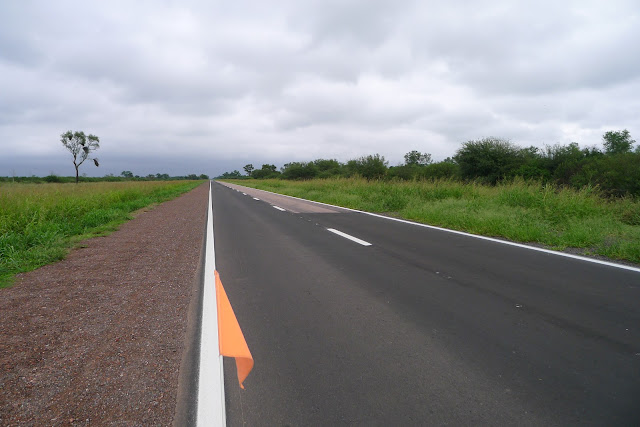 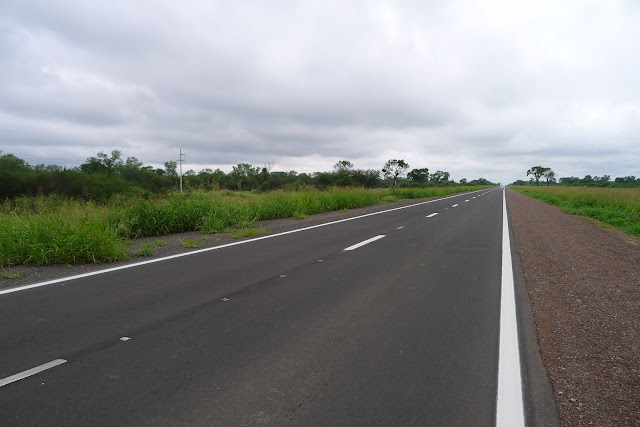 Along the route towns and villages were reasonably spaced around thirty-forty kilometres apart so food and water was easily available and good progress could be made. Apart from a brief pulse of excitement from an occasional few-degrees road-bend after twenty kilometres I'd play some music to keep myself entertained, watching an occasional passing cars fade into the horizon, or upon seeing one come toward me I'd see how many white lines I could count to before it whizzed by. For almost a week I never had a single metre's gain in altitude, it was as flat as Holland!
In the village of Los Frotenos I was filtering some water-tank water when a man driving passed stops and asked If I'd like some food, with an obvious answer I follow him back to his house and soon Julio has the barbecue lit with some big steaks sizzling away whilst we sip on a cool beer.  He suggest's if I like I could camp there, under the shade from the day's intense heat - now on beer #2 - again, an obvious answer. My first shower after six hot, sweaty days felt soooo goooood!
The night before one of my tent's poles had snapped and Julio manages to sufficiently repair it, with limited tools myself I wondered what I would have done had we not of met! 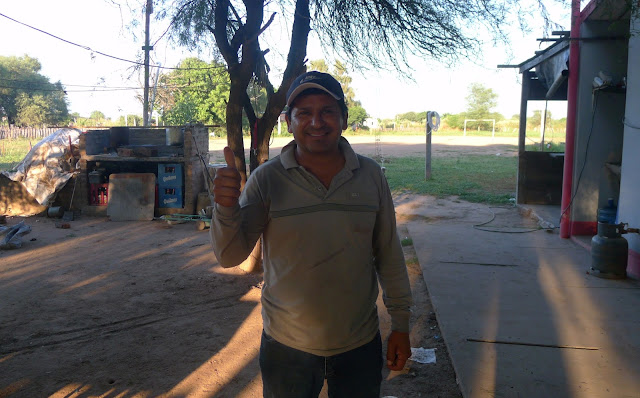 The following day Ruta-89 merged with the 16 and subsequently became a different beast. Many trucks now passing and many very close! Having no hard shoulder meant if two trucks were passing there was no space for me, they'd always blare their horn as if to say "move out the way bike, as we're not moving", definitely one of those times when the mirror wins out-right on the 'mirror versus helmet' debate amongst cyclists.
With just one photograph taken in 113 kilometres I arrive in the city of Presendencia Rogue Saenz Pena. Disconnected from WiFi for a week it was good to make a few updates...due to the road's straightness, unlike normal the blog's map only took a few clicks to update! With a WarmShowers host's parents expecting me in Machaigai - a town forty eight kilometres down I send a message to inform them I'd be there the next day.
Arriving around mid-day I'm welcomed into Camila and Joaquin's house and soon being fed some scrumptious home made pie! Unfortunately with neither of us speaking either's language proved limited conversation but all was good. Joaquin was self employed with a small adjoining workshop repairing chainsaws, being a hardwood forestry area he was never low on work - his shelves were packed with saws awaiting a repair / service. 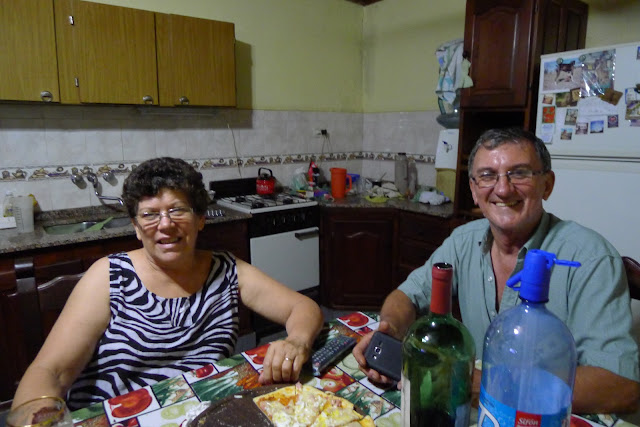 Back to the flat-lands, counting down for the past week I was now approaching double figures..

Approaching mid-day I see a cyclist heading my way, he was from Uruguay and actually heading to the same family's house I'd stayed at!....informing him exactly how many kilometres to reach their house. Did I mention how straight the road was?... 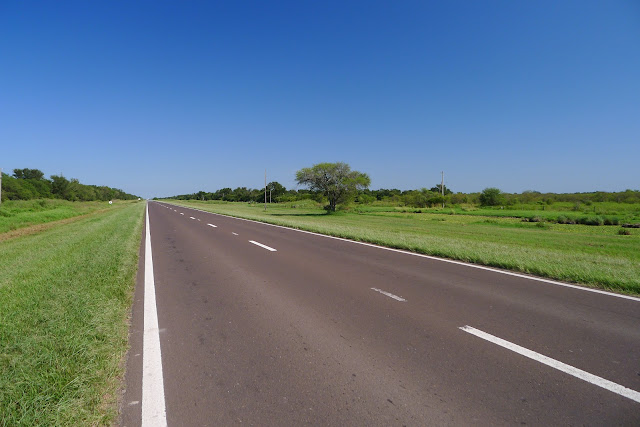 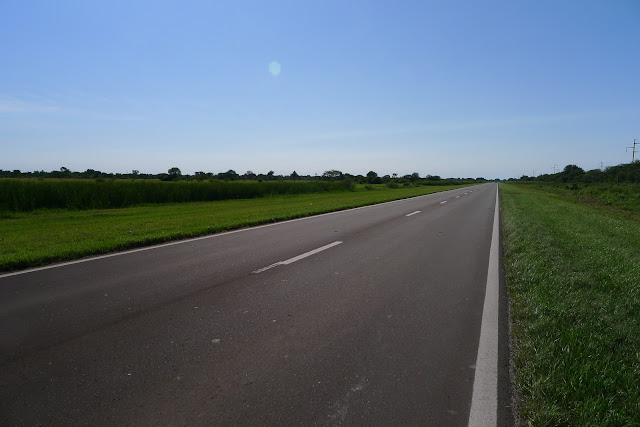 A final night camping on the edges of a village the following day I reach the big provincials capital city Resistencia that sits on the Paraná River.....good job I didn't fancy a swim! Crossing over the huge bridge into the neighbouring city of Corrientes - in the same-name Province.... 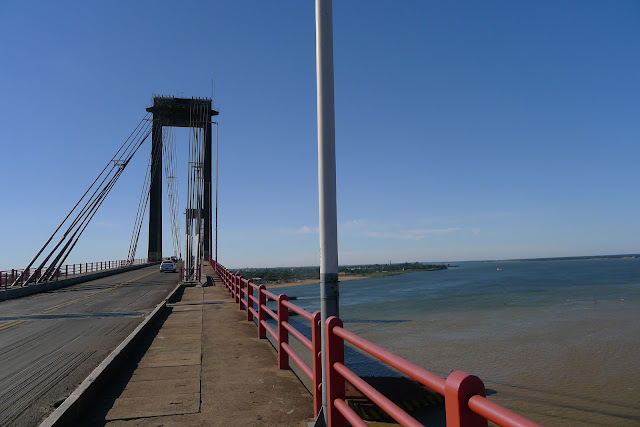 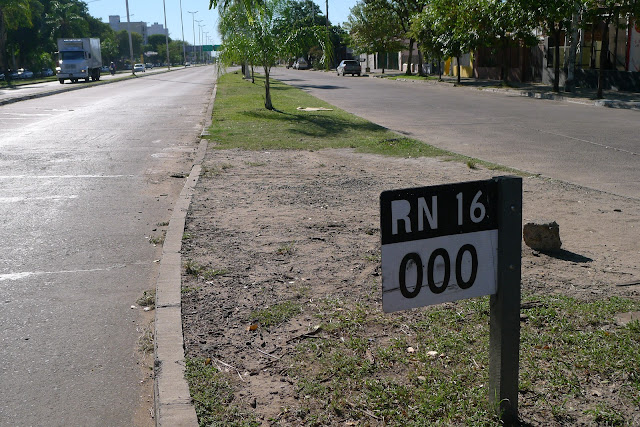 Next up I'm at the world's largest waterfall system.
- - -